Fellow Travellers, please stay safe during this time of need! For more information Visit the COVID-19 Portal Here
Previous
Next
Previous
Next

Let us quote you

The Cape Peninsula (Afrikaans: Kaapse Skiereiland) is a generally rocky peninsula that juts out into the Atlantic Ocean at the south-western extremity of the African continent. At the southern end of the peninsula are Cape Point and the Cape of Good Hope. On the northern end is Table Mountain, overlooking Cape Town, South Africa. The peninsula is 52 km long from Mouille point in the north to Cape Point in the south.

The courses of the warm Agulhas current (red) along the east coast of South Africa, and the cold Benguela current (blue) along the west coast. Note that the Benguela current does not originate from Antarctic waters in the South Atlantic Ocean, but from upwelling of water from the cold depths of the Atlantic Ocean against the west coast of the continent. The two currents do not “meet” anywhere along the south coast of Africa.
The Peninsula has been an island on and off for the past 5 million years, as sea levels fell and rose with the ice age and interglacial global warming cycles of, particularly, the Pleistocene. The last time that the Peninsula was an island was about 6000 years ago. Soon afterwards it was joined to the mainland by the emergence from the sea of the sandy area now known as the Cape Flats. The towns and villages of the Cape Peninsula and Cape Flats now form part of the City of Cape Town Metropolitan Municipality. 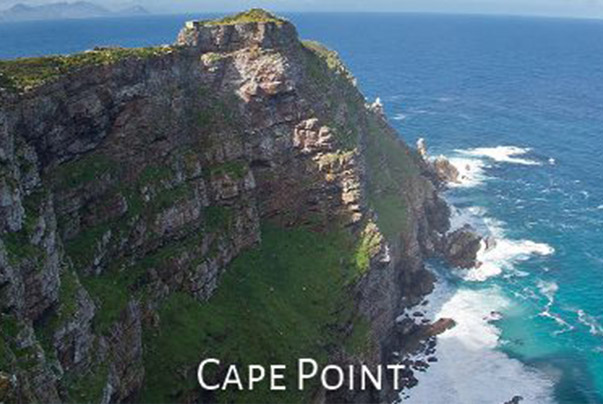 The Cape of Good Hope is sometimes given as the meeting point of the Atlantic and Indian Oceans. Thus the west coast of the Peninsula is invariably referred to as the “Atlantic Coast”, but the eastern side is known as the “False Bay Coast”. It is at Cape Point (or the Cape of Good Hope) that the ocean to the south is often said to be divided into the Atlantic Ocean to the west, and the Indian Ocean to the east. However, according to the International Hydrographic Organization agreement that defines the ocean boundaries, the meeting point is at Cape Agulhas, about 200 km (120 mi) to the southeast.

Similarly, Cape Point is not the fixed “meeting point” of the cold Benguela Current, running northwards along the west coast of Africa, and the warm Agulhas Current, running south from the equator along the east coast of Africa. In fact the south flowing Agulhas Current swings away from the African coastline between about East London and Port Elizabeth, from where it follows the edge of the Continental shelf roughly as far as the southern tip of the Agulhas Bank, 250 km (155 miles) south of Cape Agulhas. From there it is retroflexed (turned sharply round) in an easterly direction by the South Atlantic, South Indian and Southern Ocean currents, known as the “West Wind Drift”, which flow eastwards round Antarctica. The Benguela Current, on the other hand, is an upwelling current which brings cold, mineral-rich water from the depths of the Atlantic Ocean to the surface along the west coast of Southern Africa. Having reached the surface it flows northwards as a result of the prevailing wind and Coriolis forces. The Benguela Current, therefore, effectively starts at Cape Point, and flows northwards from there, although further out to sea it is joined by surface water that has crossed the South Atlantic from South America as part of the South Atlantic Gyre. Thus the Benguela and Agulhas currents do not strictly “meet” anywhere, although eddies from the Agulhas current do from time to time round the Cape to join the Benguela Current.

Let us quote you